Stratosphere brings multiplayer tower defense to the iPad, combining both defensive and offensive strategic gameplay. Grab one side of an iPad and play as one of three unique teams, taking on your opponent with 12 different creatures that you can send to assault their gates.

Stratosphere was designed from the ground up for iPad, to turn it into a real-time, interactive board game. Pick a side of the iPad and begin placing sentry turrets to defend your gate, and send waves of creatures to overwhelm your opponent. Feeling a bit lonely? Play singleplayer against a Stratobot to hone your skills, complete missions, and unlock awesome new modes and levels.

Stratosphere has received a free update with a brand new online multiplayer mode! Challenge your Game Center friends, or find a game with matchmaking, and prove that you are a Stratomaster.

With social level selection, online chat, and a brand new ranking system, the new online mode is a huge addition, but version 2.0 expands the game even further. Customize every monster in the game with unlockable costumes, play the new level "Shattered Walkway", check out Stratosphere's monsters and towers in the new almanac, unlock achivements and much more.

Get the update now »

Leave your email below and we'll make sure you're the first to know about new Pixile games!

Enter the world of Stratosphere where three alien races fight for space on towering spires above a polluted alien world.

Michael visits the TWiT Brick House in Petaluma and plays a game of Stratosphere with Leo Laporte.

Pixile was founded in January 2011 in Vancouver, British Columbia to build awesome apps and games. We work hard to ensure that everything we create is designed to be simple, polished and a ton of fun, and we don't settle for anything that can't make at least a few people smile.

Our games are designed for hardcore gamers and newcomers alike, and we're putting a particular emphasis on multiplayer experiences. Stratosphere was 2-year passion project that we've continued to update since launch, and represents all of our core values when approaching a game. We hope that you'll get as much fun and entertainment out of it as we had creating it. 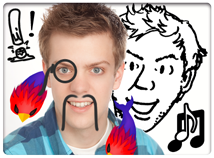 Michael directs product at Tandem Capital, a seed fund in Silicon Valley, and loves everything to do with games, mobile tech, and startups. He obsesses over the tiniest design details of Pixile's apps and games, and strives to ensure a fun coefficient of at least 9.5 (isn't it fun making up metrics?). He also has a background in mobile and web development, plays piano and drums, and can whistle with his tongue curled. 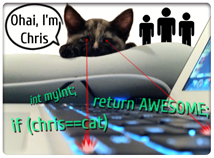 Chris has been developing iPhone and iPad apps ever since the App Store began, and has been developing games and mods for more than 10 years. Chris has released several Starcraft 2 mods that have ranked in the top 10, and also once served a ping pong ball that curved from two rooms away and aced Michael. No joke.

Congrats! You made it to the end of the page. A winner is you.